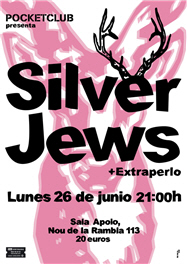 All-round brilliant band, the Silver Jews roll into Barcelona next Monday as part of their very first tour. Their appearance will mark the completion of a twelve-month Drag City trilogy for me, having also seen Jennifer Herrema and Will Oldham (Bonnie ‘Prince’ Billy) over the past year. Only Neil Hagerty and Smog could make the lineup totally complete.

I’m not expecting the concert to be breathtaking in its musicality: David Berman is famously uncomfortable on stage. But it will be wonderful to see a band we’ve been listening to lots recently.

I’m not sure about whether Stephen Malkmus is involved in the tour, but that would be a huge added bonus. As will laying eyes on the sweet and delectable Cassie (Berman’s wife).

The concert takes place at about 9 in the Sala Apolo, off ParalÂ·lel (probably Barcelona’s best live music venue, along with La Paloma). Tickets are handled by Telentrada (but you can’t get tickets online: we’ve been told to buy from a Caixa Catalunya ATM).

Click here to read my ‘review’ of the show!