I had the chance to spend a little time in the protest camp in Plaça Catalunya in Barcelona today. I’m no good at estimating the size of crowds but there were many more people around today than there were yesterday. Here are some snaps I took with my phone.

Note: I feel that I should point out that we were only in Sierra Leone for 9 days, and spent all of our time on the Freetown peninsula. Naturally, I could never claim to be an expert on the place after such a brief and limited visit. But I hope that my impressions might count for something, especially for anyone who’s never had the chance to visit.

Despite its stunning natural beauty, Sierra Leone doesn’t seem to strike people as the perfect holiday destination. Mention the West African state’s name to anyone here at home (and we did, ad nauseam, until we left), and they’ll generally respond with vague knowledge of war, bloodshed, diamonds, cocaine and guns. This is understandable because Sierra Leone isn’t generally mentioned in the media in Europe except in those terms. Films like Blood Diamond and Lord Of War, the only recent Hollywood depictions of the country, help to promote this view. But that was then. The civil war officially ended 9 years ago and ever since, Sierra Leone has been putting itself back together.

But at the same time, people are sort-of right: Sierra Leone is not a perfect holiday destination. We were lucky enough to be visiting a friend who works for a foreign agency in the country. Pretty much all the non-local people we met work in similar jobs, for various NGOs or for the UN. The rest were visiting friends who worked there, or were returning for a holiday having already spent time working for an aid agency. As I understand it, very few ‘complete’ tourists (that is, people with no-one to show them around/provide accommodation) ever seem to make the journey. And to be honest, I struggle to recommend such a visit at the moment, unless it’s done through the TribeWanted eco tourism project.

Sierra Leone, you see, doesn’t just lack tourist infrastructure. It lacks infrastructure. There are relatively few major metalled roads in the capital, Freetown, and only a handful outside, making travel in 4×4 practically essential. Lungi airport, the only realistic way of arriving in the country, is the most basic international airport I’ve ever used (it apparently has no computers, so check in when you leave is an entirely manual pen and paper task). There are relatively few shops, so visitors and ex-pats tend to rely on a handful of expensive supermarkets and the market area in town, where availability of goods can never be guaranteed. There are hotels, but some of them are, according to what I’ve been told, pretty dodgy.

All that said, Sierra Leone is a beautiful, enchanting and wonderful country. The beaches and forests of the Freetown peninsula are about as gorgeous as you’ll find anywhere in the world. Freetown itself, for all the dust, is a great city: full of movement, work, fun and music. The Sierra Leonean people we met were quietly confident about the future of their wonderful country and far more open to talking about local issues and their aspirations than people in many other countries I’ve visited. The restaurant business seems to be picking up, and while I need to return to try more of the local food, visitors can eat well in plenty of locations in Freetown.

Next part: Bureh & Lumley. You can see our Flickr set of our visit here. 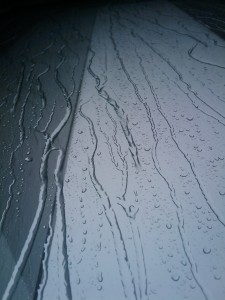 Hello rainstorm, come into my life

These posters can be seen all around London. I rather like the design, though only because it appears that the designer must have intentionally lampooned the surveillance society. If the Nineteen Eighty-Four reference was unintended, then maybe I don’t like it quite so much.

Does anyone know anything about the designer?

This billboard is on my walk from the bus to work. It’s advertising the ‘This is war! Robert Capa at work’ photographic exhibition which has come to Barcelona after a successful stint in London. The image used is, of course, Loyalist Militiaman at the Moment of Death – a fine photograph which most experts consider to have been posed (not that this makes any real difference: all images are created, one way or  another, and this is a particularly good image).

Attached to the billboard is an interesting statement from persons unknown, pointing out that Capa’s great work was staged, and then continuing for lines and lines and lines without really saying anything that makes sense. Is this madness?

One other thing worth noting: hampones is a synonym of ladrones, I’m told. It’s a new one on me.

As I was walking back from the Mississippi station today, I happened to bump into a TV3 OB team and a bunch of Culés. I asked a likely young lass if, perchance, El Barça would be coming through shortly and she confirmed that they were on their way.

I stood around for about five minutes and then spotted the TV3 team moving into the middle of the road, a surefire sign that the bus was on its way. And then, there it was. Heralded by flashing blue lights, cheers and foghorns, the Barça bus made its way across Carrer Numancia towads us. The cup itself was displayed proudly at the front of the bus, and some figures could be seen behind the tinted glass, waving and cheering. I imagine Eto’o led the chants.

Behind the bus was a fleet of hundreds of motos and cars, horns sounding and flags waving.

But this was fairly subdued by Barcelona standards. Everyone knows that within a couple of weeks, we could all be celebrating a much bigger triumph. If Barça can win the Champions League and secure a historic triple (yes, that’s a big if, but it’s there to be won), Barcelona will party for days on end.

(All 9 pics here. By the way, the pics aren’t great: I was using our compact camera and I was somewhat hurried)

We spent a day at our winter hangout, Port del Comte in the Solsonès… here are some pictures (click the image to open the set on Flickr).

Yes, it has been sunny. I’ve been studiously ignoring the news here too. The only thing really worrying me is the current water crisis, which has us on a hosepipe ban already, even though we’re at the beginning of April.

Our great friends Mary and Ben came to visit, which gave us the opportunity to visit the Castell de Remei winery in Lleida province. It has a pretty good restaurant and my wild boar cooked in the local wine was absolutely delicious. We also picked up a few bottles of ‘Gotim Bru’ (about €6) as well as the delicious ‘1780’.

The next day, we took a stroll in the Collserolla park, which is just a ten minute walk from our front door. Not as wild as the Prepirineu but pleasant all the same.

We’ve also been lucky enough to really start enjoying our terrace, which at this time of year becomes an additional kitchen, dining room and salon, and gives us a bit more room to stretch out (the interior of the flat is only 50m2).

This is our joint Christmas present, the Pentax K100D Super. It’s absolutely gorgeous and we’re really happy with it. As our first move into the world of DSLRs, it may take a little time before we get used to it… but as soon as we’re up to speed, we’ll try to put together a nice album of photos of winter in the Collserolla & South Hams or something like that.