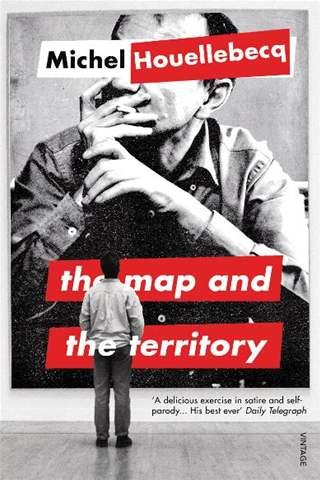 I spotted The Map and the Territory in FNAC Barcelona a day before going on vacation. I suddenly remembered other Houellebecq novels I’ve enjoyed on holiday, such as Atomised and Platform and despite the French entertainment store’s relatively high prices for books printed in English, I immediately added it to my basket, along with a book by David Lodge and Steinbeck’s East of Eden.

FNAC’s entire pricing structure seems to be totally at odds with its original mission, that of a sort of cooperative capable of bringing literature to Paris’s working classes at affordable prices. Of course, the original project became a public limited company in 1980, which was probably the beginning of the end for any ethical beliefs its founders may have attempted to imbue the firm with. As soon as you get shareholders involved, it seems, your values mean very little.

I started to read the novel as soon as my vacation began, which is to say as soon as the Balearia ferry Martín i Soler left the dock at Barcelona’s ‘old port’. I ensured that I had a can of Voll Damm lager and a packet of Ducados cigarettes close at hand. I always find that smoking Ducados cigarettes helps me enjoy the act of reading a little more and despite the obvious health risks, I take particular pleasure in the ritual of smoking and reading, reading and smoking. Besides, I like the blue and white of the Ducados packet, and the green of the Voll Damm can especially when placed on a white ferry table, and especially when viewed from behind my imitation-tortoiseshell foldable Ray Ban Wayfarer sunglasses.

What makes Houellebecq’s book particularly engaging is its humour. This starts with a withering, albeit apparently love-rooted, mockery of the art world and the Paris scene in particular. But it is when the author introduces himself as a character in the book that things get really funny.

What I prefer, now, is the end of December; night falls at four o’clock. Then I can put on my pajamas, take some sleeping pills, and go to bed with a bottle of wine and a book. That’s how I’ve been living for years. The sun rises at nine; well, with the time it takes to wash and have some coffee, it’s almost midday, so there are four hours left for me to hold out, and most of the time I manage without too much pain. But in spring it’s unbearable. The sunsets are endless and magnificent, it’s like some kind of fucking opera, there are constantly new colors, new flashes of light. I once tried to stay here the whole spring and summer and I thought I would die. Every evening, I was on the brink of suicide, with this night that never fell.

– says Houellebecq’s character after proposing dinner at 6:30 pm in a chain pub. He goes on to talk about how he spends the rest of his time in Thailand, enjoying the brothels.

There’s also a quote that I can’t currently find where the painter, Jed, discusses with his father the qualities of Houellebecq’s analysis. It’s about the funniest thing I’ve ever read.

Get this book, and read it. The Map and the Territory: 1/1

I’ve also posted this review on he Goodreads website, which I’m currently trying out.

One thought on “Review: The Map and the Territory by Michel Houellebecq”